Popular Democracy. The Paradox of Participation 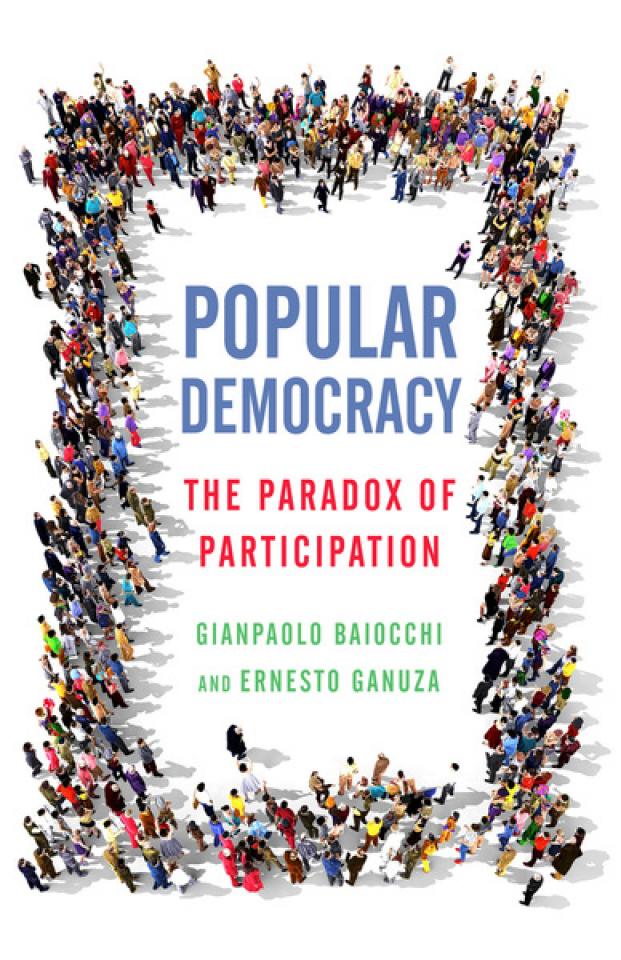 Local participation is the new democratic imperative. In the United States, three-fourths of all cities have developed opportunities for citizen involvement in strategic planning. The World Bank has invested $85 billion over the last decade to support community participation worldwide. But even as these opportunities have become more popular, many contend that they have also become less connected to actual centers of power and the jurisdictions where issues relevant to communities are decided.

With this book, Gianpaolo Baiocchi and Ernesto Ganuza consider the opportunities and challenges of democratic participation. Examining how one mechanism of participation has traveled the world—with its inception in Porto Alegre, Brazil, and spread to Europe and North America—they show how participatory instruments have become more focused on the formation of public opinion and are far less attentive to, or able to influence, actual reform. Though the current impact and benefit of participatory forms of government is far more ambiguous than its advocates would suggest, Popular Democracy concludes with suggestions of how participation could better achieve its political ideals.

This chapter describes the dramatic changes in government practices in the last two decades in the Global North, setting the stage for the rest of the book. Unlike previous eras, in which citizen participation was more closely associated with social movements or transformative projects, these newer projects are mainstream prescriptions. Among practitioners and some parts of the academy there has been an uncritical celebration of this citizen participation, which is inattentive to its limits and takes participation in itself as evidence of democratization. On the other hand, there is a critical literature that is entirely dismissive of new forms of participation as being essentially equivalent to neoliberalism. The chapter seeks to change the terms of the debate entirely, by focusing on the collective processes through which participation comes to be instituted in any one place and therefore remaining attentive to political struggles, controversies, and contingencies.

2 The New Spirit of Government

This chapter discusses the main changes in the organization and ethos of government in the United States and Europe since the 1980s, which the authors call the "new spirit of government." It traces changing debates about the role of government, beginning with the "crisis of democracy" of the 1970s through to the ideas of "new public management" in the 1980s and the emergence of "new public governance" in the 2000s, which placed citizenship and citizen engagement at the center. The expansion of participatory instruments has given citizens a new, privileged place. Yet because these new scenarios are introduced by administrations, they also set the limits of the debate: what is discussed and how it is discussed. Administrative institutions are based on a propositional logic that repels the dynamics of citizens' claims and protests, which are described here as "empowerment within limits."

3 The Global Spread of Participation

This chapter offers a sweeping view of the process by which participatory budgeting, an experience in one city in Brazil, came to be repeated and adopted on five continents. It traces the connections and networks that carried the idea through Latin America and later to Europe, Africa, Asia, and North America. The authors argue that as participatory budgeting traveled it became detached from its associated political project and from administrative reform. Originally established by a leftist city government, it was part of an ambitious project of municipal reforms that included significant transformations in administrative practices and structures. In the late 1990s it was emblematic of a successful leftism and was adopted throughout Brazil and Latin America; but as part of a toolkit of best practices it became an isolated device that could be adapted to differing political projects and implemented outside of the state, independent of additional reforms.

4 The Rhetoric of Emancipation: Córdoba, Spain

This chapter analyzes in depth the implementation of the new instruments of participation in Córdoba, Spain. With a tradition of innovation since its transition to democracy, Córdoba was where participatory budgeting first landed in Europe in the early 2000s. The participatory rhetoric that surrounded the launch of the Spanish experience spoke of democratic regeneration, greater involvement of citizens, and a better distribution of public resources. This was not how the project evolved, however, and the ethnographic account carefully shows the lines of division that the project evoked: between citizen and expert, and between organized and unorganized citizens. This conflict eventually undermined the process itself. Nonetheless the experience became a model in Spain, and was part of a generation-long shift that culminated in the election of participatory municipal administrations in 2015, committed to radical principles of participation.

5 A Government Closer to the People: Chicago, Illinois

This chapter tells the story of participatory budgeting's arrival in Chicago, Illinois, in 2009, nearly a decade after its inception in Spain. The idea was implemented in the 49th Ward, which had a strong civic orientation of "bringing government closer to the people," by an alderman who was a party outsider. The authors explore the controversies this generated over notions of the good citizen, expertise, and who speaks on behalf of the people. Despite these issues, the process was successful and became a template adopted in other Chicago wards and other U.S. cities. These cities varied deeply in their orientation toward inclusion; some, like New York, relied heavily on social movement allies to make the process inclusive. Nonetheless the U.S. model that became dominant was based on the Chicago model, which had few resources at its disposal and did not imply reforms of the state.

6 The Utopian Undercurrent of Participation

The final chapter returns to one of the motivating questions of the book: What does all of this participation say about emancipatory possibilities in the current global moment? It also considers what participatory budgeting might look like from the point of view of an emancipatory project. The authors discuss the missing "sovereignty dimension" of participatory experiments—arrangements where participants deliberate not only the priorities of projects but also the very terms of participation itself. Although the cases of Córdoba and Chicago were ones in which the "sovereignty dimension" was quite limited, they did not entirely foreclose politicizing possibilities. Rather, they at times served as a critical stage that allowed citizens to go beyond the intended limits of the process. The authors argue for bringing these critical moments to the fore of experiences and discuss the necessity of concurrent political mobilizations to drive the politicization of projects like participatory budgeting.